It's Father's Day and time to remember all the wonderful dads in our lives. My ideas of  life, parenthood and happiness have been influenced by four men that I have watched in their roles of father/grandfather.  I learned a lot from each of them and count myself lucky to have had them in my life.

Roy Alvick was a first generation Norwegian American, with bright blue eyes and a quiet demeanor.  He was the father of only one son, my wonderful dad, but the grandfather to five active kids. Our grandmother was known to dominate the conversation, but if you could get Grandpa alone he always had something interesting to say.  He could always be depended on to listen closely to what his grand kids had to say, asking thoughtful questions with no sense of hurry.  Grandpa was one of the smartest men I've ever known, though most people might not know the depth of his intelligence by the lack of his words.  He was present at every important event of my life and cried at my wedding.  He lived to be 100 years old and had his wits about until the end. Grandpa taught me it's just as important to listen as it is to talk.

Grandpa Don was my mother's father.  He had a deep laugh, a big belly and smoked a pipe.  He'd spent his life working as a logger, fishing, and writing poetry.  He had three daughters (one who died as a young woman), but ended up with 11 grandchildren.  He was the pied piper of grandfathers--us grand kids would happily follow him wherever he went.  Grandpa Don used to have us pile into his old stinky truck and go up back roads, down to the waterfront of his hometown, or anywhere he needed to go that day.  Sometimes, if we were out in the country, he'd let us sit on the back tail gate, swinging our legs over the dusty road (as long as we promised not to tell Grandma or our mother).  Grandpa Don taught me that kids don't need trips to Disneyland or expensive gifts to know they're loved, they just need your presence and your attention.

My father, Bud Alvick, is indeed a man among men.  He started his career as a math teacher, moved into a position in school administration and eventually became an elementary school principal.  Dad was always a people person and had a way with kids, especially his own  We didn't have a lot of money growing up and our house was filled to the brim with five kids, two parents, a dog, and various pet rats/mice/hamsters.  Dad treated me, the youngest and probably whiniest child, as if I was something special.  He never asked me to be more like my brother, to excel at anything I didn't have a passion for, or to be anyone but who I was.  He taught me who I am is all I need to be and that the men in my life should treat me with respect and admiration. 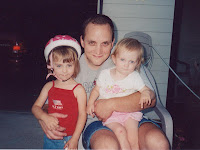 My husband, Ed, lost his own father to cancer just months before we met.  Although I'd never had a chance to meet his dad,  I got the impression that he'd had set a pretty high standard in Ed's mind of what it meant to be a father.  Our first child was a boy followed by our older daughter three years later.  I could tell he thought this second child would be more mine than his.  He looked forward to taking our son hunting and fishing--what would he do with a little girl?  These days our two girls have their daddy wrapped around their fingers and he happily takes them wherever they ask to go.  "Hunger Games" movies and art galleries may not have been what he had in mind when he started out on the road to fatherhood, but he is happy to make the trip.  My husband has taught me that sometimes what you never expected in life turns out to be exactly what you always wanted.

Posted by Kristin Alvick Graf at 1:28 PM No comments:

While scanning the online news I begin to think the writers are either National Enquirer alumni or Masters of the Obvious.  I realize the headlines for internet news sources are over exaggerated to pull you in, but sometimes they have very little to do with the actual story.  The following are some of those that caught my eye, the weird and the wonderful, the obvious and the obnoxious.


The Most Common Running Injuries And How To Avoid Them

My first thought on seeing this was:  so have millions of men on the internet, late at night, with only one hand on the keyboard.  Kim has been taking a beating lately for things she's said while being followed around day and night by a TV camera.  Apparently she announced that "Indian food is disgusting."  If you or I said this, in the circle of our friends, most would just think we don't like Indian food.  Kim announcing it on national TV was like declaring war on anyone of Indian heritage.  It was the foot-in-mouth moment we've all experienced, but then we're not being paid millions of dollars to be followed around by a TV camera.  (Wait, we're not are we?)

Okay, I would not have gone with the painfully awkward alliteration.   ("Weary Writer Wrings Words from Week-old Tale of Whiny Whippersnapper")  A child and his father were asked to leave a plane before take off because the child wouldn't sit in the seat belt.  This writer's solution?  Kid-free flights.  Apparently said-writer was never a child herself (or has ever had  the pleasure of traveling to Las Vegas with a bachlorette party or a group of 20-something "men" hoping to get lucky).


Star Refused to Shave Legs as a Kid

WTH???  It was Kristen Stewart and she was 13.  How is this interesting to anyone who is not a complete stalker?  But then I wondered if the real reason Bella didn't marry Jacob is because she's his long-lost werewolf sister.  Then I realize I've spent way too much time thinking about this.


10 Simple Ways to Lighten Up and Let Life Flow

AOL's Health News always has an article like this:  "5 Ways to Be Happier at Work," "Ten Easy Steps to Make Love Last, "3 Things That No One Is Interested In Reading About."  Number 10 in the actual article is  "Smile at strangers."  Umm...?!?  Smiling at strangers will undoubtedly lead to a creeper following you home, in which case you will probably not lighten up.

Why would someone want 400,000 toothpicks?  I tried googling "what to do with toothpicks" and none of the listings had any more than 5 ideas (and that still leaves you with like 399, 995 toothpicks).  One use was plugging a hole in a garden hose--not very imaginative if you ask me.  Turns out this was an inside job--at the toothpick factory (?!?)--and the guy was selling them at a flea market.  Also not very imaginative (and I can't think very lucrative, unless of course you're in the martini business).


I know I spend way too much time thinking about this stuff (so you don't have to!), but I am amazed by what passes for news (or news-like articles).  A couple of these were taken from the "Weird News" listings, but most were just regular news stories.  As they say, you just can't make this shit up.
Posted by Kristin Alvick Graf at 9:51 PM 1 comment: