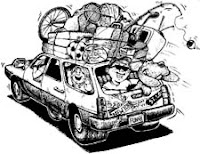 Traveling with children always presents a certain set of challenges, but vacationing with two teenagers and a tween has occasionally pushed my husband and I to our limits of the "Fun Family Memories" parents, turning us into "Just Get in the Car and Be Quiet" parents.  While planning this summer's trip,  I tried to find something that we'd all enjoy, but didn't have to drive eight hours to get to, or fork over money we don't have to wait in long lines for over-priced activities.  Or that wouldn't  lead my husband and I to AA.

When I hit upon going to Leavenworth, a Bavarian-themed town in Eastern Washington (a mere 2.5 hours away), I was sure I had a winner.  My husband was excited to go white water rafting, we could invite his mother along, and with the hotel serving up putt-putt golf, a swimming pool and a game arcade, there was something for everyone.  Our oldest quickly voiced his disapproval--he had "plans" for that weekend, complaining loudly and often about the injustices of a family vacation.  Our middle child was unimpressed and the youngest had some serious misgivings about bouncing around on a raging river in a glorified floaty.

I don't care, just get in the car and be quiet.

Our journey started off smoothly enough--having Grandma in the car with us damped down some of the outbursts of teenage irritation.  (Note to self:  bring mother-in-law along on all trips.)  When we got to our rafting trip, however, I started to feeling some doubt.  I looked around at the other participants and noted the lack of children in the group.  I worried they all knew something about this adventure that I had somehow missed in the fine print.  Was this not appropriate for the under 20 set?  Were they all judging me for exposing my children to danger?  It didn't help that our guide, in giving the training speech, was talking about what to do should you fall out of the raft.  Or as he specified, were "forcibly ejected" from the raft.  Um, wait...What?! 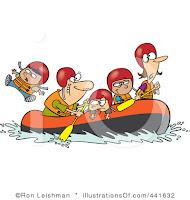 Once we went through the first set of rapids (class IV, huge wall of water in my face, felt like I was about to be forcibly ejected), our two younger children began to have a few doubts of their own--younger daughter was clinging to my arm and asking when it would be over--but nothing says family togetherness like fighting a wall of water in a glorified floaty.  We paddled on.

As the trip continued some amazing things took place.  After we passed the roughest of the rapids,  our guide let a few members of our rafting team try out the kayaks.  Our oldest teen got in one and was immediately transformed into a smiling, confident young man who seemed to be a natural on the river.  Our middle child went in a two person kayak with her father and they ended up tipping themselves into some lesser rapids. Once they managed to right themselves, she was no longer so blasé.  This river was the real deal and she'd have to work to get to the end--and she enjoyed the challenge.  By the last leg of our trip, our youngest, the one who had to be talked into this whole thing, was sitting on the edge of our raft, paddling along with everyone else and hardly flinching when splashed or bumped.

I sat in that raft in the middle of the Wenatchee River and was amazed at the confidence of our children and their ability to adjust.  I was proud of each of them for finding their way in this adventure I'd forced on them,  And then I gave myself a small little pat on the back for coming up with this idea (and for having such wonderful children).

Parenting, if you will, is like white water rafting.  You head out on your adventure with excitement and energy, but when you get a look at what you're in for you start to wonder if you're up for it (but by then it's too late).  You hit those first big bumps and you learn you'd better hold on tight and paddle for all you're worth.  Once you reach a patch of calmer water and get a chance to look back at where you've been,  you realize you're a little tougher than you thought.  And you just keep going.

Or parenting is like white water rafting because you do a lot of yelling and praying, praying that you're going to make it out of this alive.

Thanks to Osprey Rafting Company for a fine afternoon of adventurous parenting.
Posted by Kristin Alvick Graf at 10:06 PM No comments: