It's here--the latest publication of some of the funniest writing currently available...by mail...to any registered voter in Snohomish County.  I may be the only one who looks forward to the Voter's Pamphlet with such glee, but when you read it you'll be amazed it isn't on the best seller list. (Okay, maybe because it's free.)  And while the current edition does not include a candidate who lists his community service as being President of the Wiener Dog Appreciation Society (oh, that was a good one!), it is full of all sorts of tidbits to keep me entertained.

All good plots need a couple of remarkable characters to keep the reader interested, and the realm of politics is full of characters.  Running for U.S. Representative in District 1 is someone who goes by the name "Mike the Mover."  He has no elected experience, but he was a household goods carrier for thirty-five years.  Okay, that's no reason to count him out--he's a regular guy who knows what it's like to work hard for a living--but if you go by a catch phrase instead your real name, I can't believe you really take the position seriously. And you might ding my coffee table.

Not to be outdone by the mover, District 7 offers us GoodSpaceGuy, whose professional experience includes only "prosperity building."  I'm not sure what that means, but it does sound, well, prosperous, doesn't it?  It seems a good part of GoodSpaceGuy's platform rests on the government's lack of viable space habitats, "connected together in various, turning configurations."  Wow is all I can say to that. Good luck, GoodSpaceGuy.

Any good publication needs a good story line, and I found that in the State Representative District 10 race.  This candidate has no elected experience ("I am not a career politician!"--he is a fan of the exclamation point!), but he was an advertiser "until the recent downturned economy."  So...he's currently unemployed?  Again, not a reason to count him out.  He lists his education as "high school valedictorian, #1 in class, UCLA studies, and entrepreneur."  Okay, he peaked in high school, dropped out of college, and then worked odd jobs?  It all becomes clear once you read his platform: he will "help integrate the Recreational Use Law into practice in Washington."  Ah, the story of a promising young academic who has become an unemployed, college drop-out, all because of the evil marijuana. But he does love an exclamation point!

Legislative District 21 offers for State Representative a candidate who has a snazzy photo accompanying his statement--think Casino Night at the Lodge, circa 1979.  His education consists of "Some college, many excellent management seminars, lotta hard knocks."  Only true characters can get away with using "lotta" while wearing a 70's era tuxedo.  Thank you, District 21.

Finally, a real page-turner must always have real gooder righting. (Wow, that hurt to type.) Why worry about proof reading when there are important political agendas to be promoted?  Tired rhetoric ("Teach a man to fish..."), incomplete sentences ("Let's face it."), random capitalization and quotation marks ("A big part of this is 'NOT' to accept corporate funding") and a "lotta" exclamation points (!!!!) are all hallmarks of a successful voter's pamphlet.  While the current edition could use some intense professional editing, the last issue included a candidate who had "SO" many typos that it was clear he didn't even have time to use spell check.  I felt this also meant he didn't have time to fulfill his duties in office and did not vote for him. 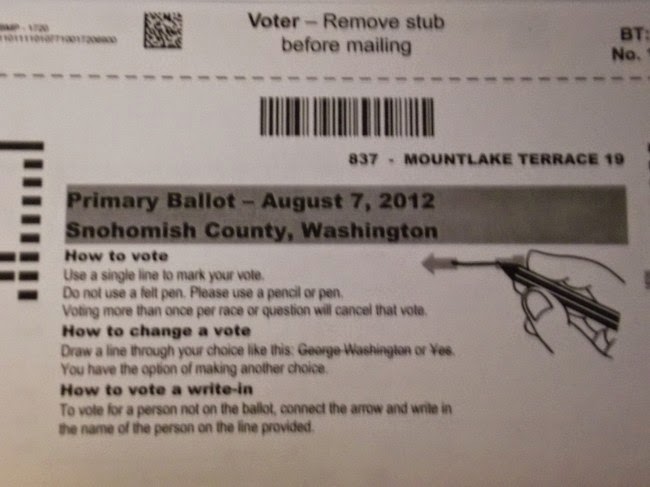 The lesson you should take away from this is it's your civic duty to be informed on all political races and issues.  Read your Voter's Pamphlet so you, too, can laugh at the candidates--and hopefully choose those that will be least likely to embarrass you while in office.
Posted by Kristin Alvick Graf at 10:44 PM No comments: