Facebook wanted to show me my 20 Biggest Moments of 2012, which included a someecard and lunch at Burgerville.  Wow Facebook, you must think I lead quite the life--just a step up from Crazy Cat Lady and the video game store clerk who spends his whole paycheck on the Assassin's Creed series.

Perhaps I should make a "Biggest Moments" list of my own, those that may have not received the most "likes", but are a better indicator of how I fared in 2012.

1)  My son turned 16.  While it would seem that this was more of a big moment for him, anyone who has a child with a new driver's license and the impulse control of a two-year-old will understand why this is also a big moment for me.

2)  I went on a trip to Minnesota where I met several people who, while I may not be related to by blood, I am proud to say I am part of their family.  And I learned that in the Land of a Thousand Lakes it is perfectly acceptable to wear a life jacket like a diaper.

3)  I voted.  I won't tell you for whom, but I will tell you that I read the voter's pamphlet and watched as much of the debates as I could stomach.  (Okay, I voted for the guy who played French horn with the UW Husky marching band in the Rose Parade.  I'm a sucker for the French horn.)

4)  My older daughter turned 13, thus enabling her to join Facebook and curtailing all the embarrassing stories I usually share about her.

5)  I wrote a blog post that got the biggest response in all my (3) years of writing--361 views!  It didn't hurt that I wrote about a local character who had already won over our entire community.   I simply put into words what everyone else already understood to be true.  But it did make me think that maybe I really should keep writing.

6)  I attended a lot of soccer games, yet only the last few were in wet or cold weather.  It was a good year for soccer parents.

7)  I visited my father in the nursing home and realized that while he's still here, a good part of his personality is lost to me.  However, I also understand that personality lives on in each family memory, in each story my siblings and I tell about growing up as an Alvick.  (And maybe one or two of my character traits.)

8)  I played tourist in downtown Seattle for the day, where I realized I know nothing about art.  Luckily, my 10-year-old daughter does and kindly guided me through the Seattle Art Museum.

9)  I took a trip to Hawaii with my extended family--husband, kids, in-laws, nieces and nephews. Nothing impresses people more than a family of 16 traveling together.  While there I realized that I may have Seasonal Affective Disorder--I was happiest just soaking up the sun on the beach.  And drinking mai tais. ( Maybe I'm actually suffering from Alcohol Affective Disorder.)

10)  Looking back on 2012 I think that I had a pretty good year.  Nothing monumental happened, no life changing events, just a bunch of happy little blips that kept me getting up every day, sometimes even with a smile on my face.  I mean, you can't have lunch at Burgerville every day.
Posted by Kristin Alvick Graf at 10:58 PM No comments:

As we head into December, it was inevitable that the whole Mayan calendar/end-of-the-world thing would resurface.  The U.S. government, however, asks that you not even go there.  They say the theory about a deadly comet crash is untrue ("definitely not"). The world will not end on December 21st, so please stop scaring the children.  (And really, what's more frightening:  sudden and irrevocable end of life on earth,  or teetering over the fiscal cliff and having to live out the rest of  your life eating dog food and heating your home with coal, John Boehner telling you "I told you so" all the while?)  Apparently it's not just us Americans playing Chicken Little--the Russian's have jumped on the end-of-the-world band wagon., too.   But they're bringing vodka as part of an apocalyptic kit (which also includes heart medication and a pain reliever).  If the world was ending,  I think a headache would be the least of your worries.  The vodka could come in handy, however.

The whole Mayan calendar craziness has been talked about, blown out of proportion, debunked and then talked about some more.  So let me ask you:  when you get to the last page of your calendar, say December, and you go to see what's happening next month and there are no more pages, what do you do?  Freak out and stockpile the bottled water?  Or go to the office supply store and buy a new calendar?  The Mayans, it's true, were very advanced for an ancient civilization. Besides their calendar making, they developed a writing system and left behind many examples of art work.  But did they have iPhones and their amazing maps?  What about Honey Boo Boo or Walmart?  (Okay, on second thought, perhaps it's best if we just end it right now.)

The U.S. government wants you to forget about the Mayan calendar thing, but they have actively promoted preparing for a zombie apocalypse.  (So let me get this straight--they don't want me to scare my children with the Mayans, but they want me to talk to them about zombies?)  They say that it's all tongue-in-cheek to get people to think about emergency preparedness, but they also said that Iraq had weapons of mass destruction and that its CIA agents were paragons of morality.

Anyone who's seen the AMC series The Walking Dead could tell you zombies are the things of nightmares.  They are the undead, people!  Out to eat your flesh and infect your children!  The good news is that fear of a zombie apocalypse has spurred gun and ammunition sales.  Good news for the economy!  Bad news if you happen to be shuffling to get your newspaper in the early morning hours and your neighbor is a paranoid gun owner.  (What am I saying?  People don't read the newspaper anymore.  Wait!  I read the newspaper!!  Maybe I should start combing my hair and putting on some makeup before I head to the paper box.)

In times like this we should turn to the words of the immortal poet, Michael Jackson: 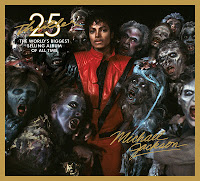 
The answer then to our apocalyptic dilemma?  Getting down.

Cue the music and bring on the vodka.

Posted by Kristin Alvick Graf at 11:21 PM No comments: